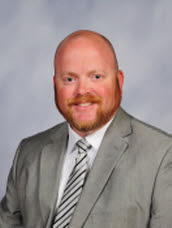 Biography
Mr. Joseph Hinson graduated from Eufaula High School in 1997 where he played baseball, was heavily involved in the JROTC program and graduated as a member of the National Honor Society. He received his Bachelors Degree in Education from Troy University in 2001, Masters Degree in Quality Schools from Graceland University in 2008 and his Ed.S in Educational Leadership from Valdosta State in 2017. Mr. Hinson is a 18-year veteran of the Houston County school system and he is a long-time member of the Feagin Mill family having taught and coached here for the last fifteen of those years.

He was a member of the 2013 Georgia Middle School Team of the Year, was selected as the 2014-2015 Teacher of the Year for Feagin Mill Middle, and is currently the president-elect for the Georgia Association of Middle Level Educators (GAMLE). Mr. Hinson is married to Lacey Stokes Hinson and they have one child, a son, Grady.